There are many skill build options for Witcher 3, and we’ve already covered the best ones. However, sometimes you just want to have fun and not necesserily run the most optimal build with the best stats.

Maybe you like the look of a specific armor set despite its weak stats, or want to use a skill that’s not as strong as other options (hello, Yrden).

In this post, we’re going to cover one such fun yet viable witcher 3 build: the Fabulous Ofieri. If you want to look stylish and still be able to kill things, this level 38 build is a great choice. 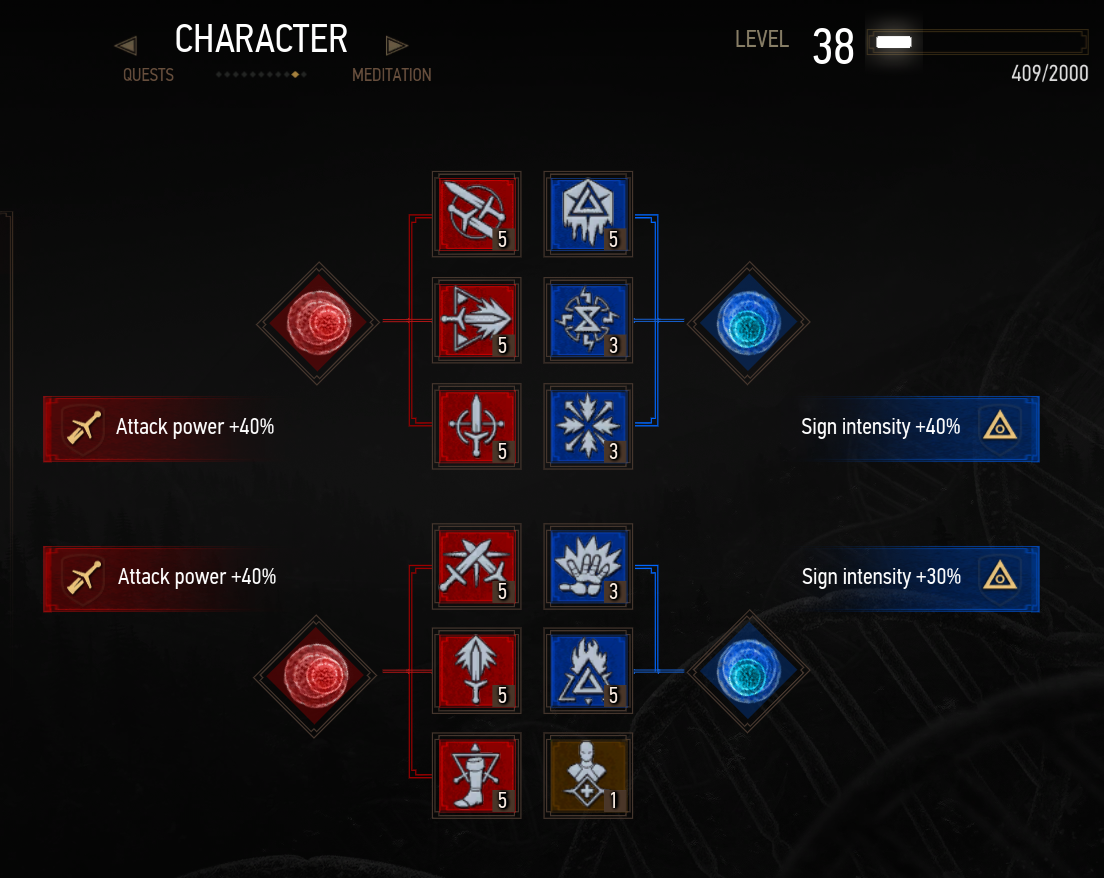 This build is meant to be used as soon as you can wear the Ofieri armor set, which requires level 38. Ideally, you’ll be at the end of the Hearts of Stone expansion and can use this build for the Blood and Wine expansion. You can use it until you grow bored or decide to get your grandmaster Witcher gear.

Perhaps not the best armor in the game for the min-maxers out there, the Ofieri Armor set has a lot to offer for players who want to use both weapons signs. And let’s not forget the flashy looks, very much distinguishable from the Witcher School Gear in the game.

Looking good is only half the equation here, as this light armor offers boosts for Quen, Yrden and Axii, while benefiting from the Cat School Techniques for light armor to boost your physical damage.

Since Quen, Yrden and Axii are already boosted by the equipment itself, what remains for a nicely rounded sign build is, of course, Igni. Add Greater Glyph of Igni in as many of the available slots as you can (9 in total on the armor, 6 after you enchant the chest piece) and it will provide some serious firepower.

Fill in the rest with Quen, Yrden or Axii glyphs, if you are so inclined.

For the final flourish, you will need a beautiful Ofieri weapon as well — Iris — the sword that is only received after a certain choice regarding Gaunter O’Dimm is made at the end of Hearts of Stone (which is about the time when you are level 38 and ready for the build).

Iris will do double damage for any type of strong attack (Rend, Sunder Armor), and when it is fully charged it will glow red for a special heavy attack.

For your Silver Sword, we are going to go with one more choice from the final Hearts of Stone mission which can also be easily missed — Viper Venomous Silver Sword. Its 10% critical hit chance and 75% critical hit damage will go nicely with our skills.

This sword does require you to be level 39, so you might want to consider drinking Wolven Hour potion if you are impatient.

Since the enchantments will be available in the game at the same time as this set, you should definitely seize the opportunity to use them. In our Ofieri build, this means enchanting the swords and the chest piece.

This build should keep you going until you are able to upgrade Witcher Gear to Grandmaster where the bonuses and stats might be enticing enough to make you want to switch.

Until then, the Fabulous Ofieri Build should keep you well-rounded, armed with gorgeous swords and looking the part on your way to the land of Blood and Wine.