We’ve been wanting to write something about Witcher lore for a while. While the Witcher franchise doesn’t leave as much room for theories and interpretations as a series like Dark Souls,  there are still some interesting things to explore.

In this entry, we’ll focus on Gaunter O’Dimm — the villain of Witcher 3’s Hearts of Stone expansion. Gaunter is not mentioned in the Witcher books and is entirely the creation of CDPR, the creators of Witcher 3.

Despite this, he turned out to be one of the most interesting villains of the series.

Who is Gaunter O’Dimm? What are his intentions? Read on for a closer look at this mysterious character.

Let’s begin by answering the most obvious question — who is Gaunter O’Dimm, also known as Master Mirror and Man of Glass? The game provides us with a lot of subtle, and not-so-subtle clues.

We can start off with the fact that when O’Dimm is making a pact with Geralt, he meets him at a crossroads, which is a common theme in many cultures when men make an agreement with supernatural creatures.

And if you talk to Professor Shakeslock, it becomes apparent that Olgierd also made his deal with O’Dimm at a crossroads.

Another clue is is that whenever O’Dimm unfreezes time, somebody utters the word “devil”. This first happens after you meet him on the Ofieri ship: 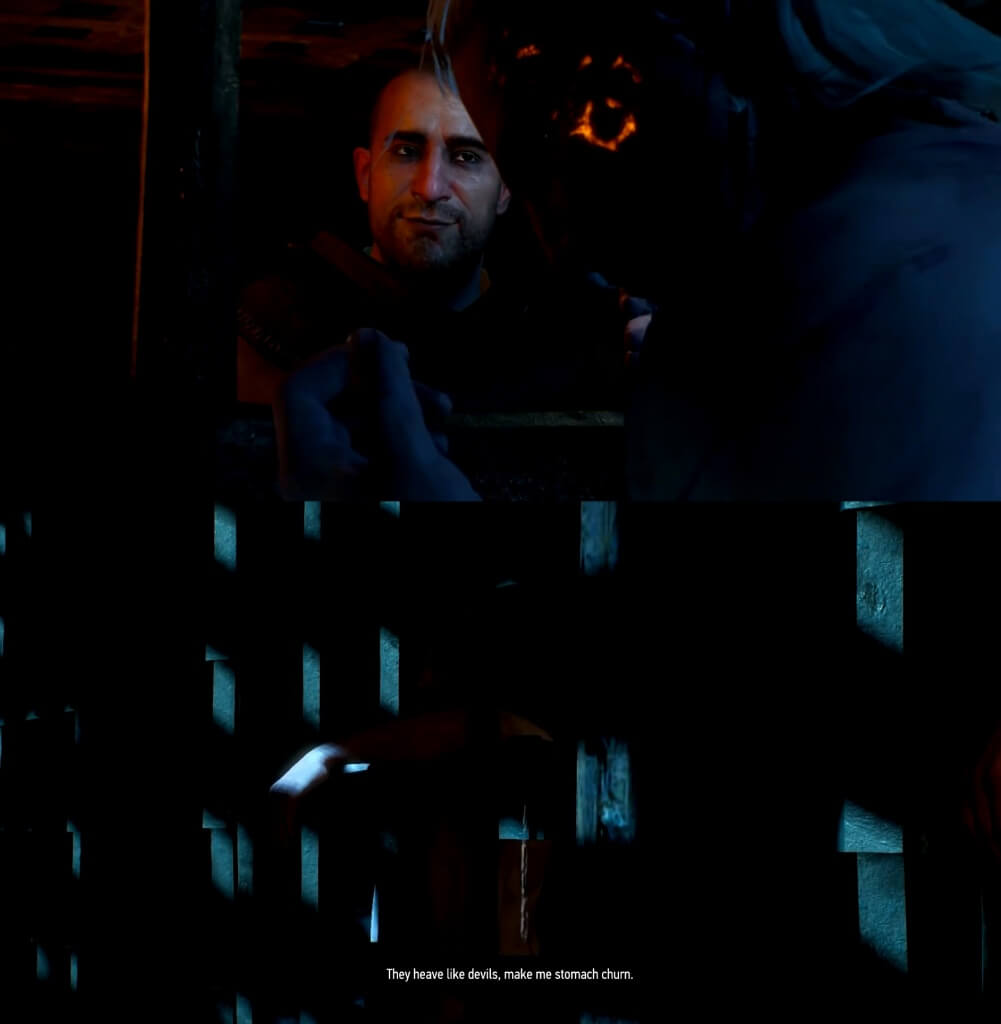 Then, when you meet him in at a tavern later on, Gaunter once again freezes and unfreezes time, and a different character mentions the devil: 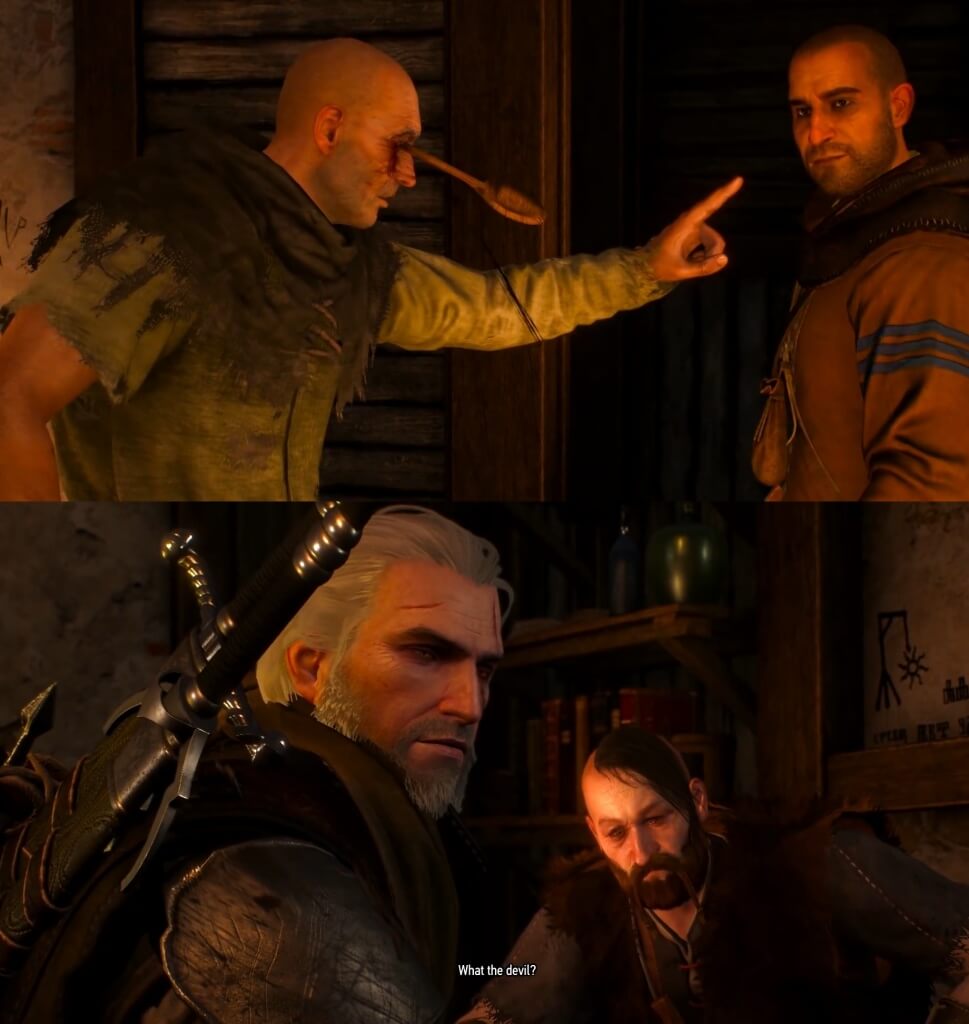 But the strongest evidence comes from Professor Shakeslock; you have the option of sneaking into Oxenfurt’s Academy to speak with him near the end of the expansion.

He reveals some very interesting information about O’Dimm, which includes this key line:

“There are records of encounters dating back thousands of years in many cultures, under many names. But always as evil incarnate. In this land, we call him Gaunter O’Dimm, at times master Mirror, or the Man of Glass.”

(You can check out the entire dialogue video here).

The Devil of the Witcher World

Evil Incarnate: that is, the embodiment of pure evil, commonly referred to as the Devil. And just as suggested by Shakeslock, the Devil is a prominent figure in many of the world’s cultures under different names.

In the game, he may be known as Gaunter O’Dimm…but in the real world, the best-known version of the Devil is Satan — the fallen angel of Christianity.

To put it simply, Gaunter O’Dimm is the Devil, but not necessarily a Christian one.

It’s likely that O’Dimm was inspired by the popular Polish folk story of Pan Twardowski — a tale that fuses elements of Slavic mythology and Christian beliefs.

This story focuses on a man who makes a pact with the Devil, trading his soul in return for special powers.

The character of Olgierd Von Everec is essentially the Witcher version of Twardowski — and just like in the story, he attempts to outwit the Devil with a special clause in their contract.

Whereas Twardowski stipulates that the Devil can only take his soul when he is in Rome, Olgierd says that his soul can only be taken when he and O’Dimm stand on the moon, and his three wishes are fulfilled by someone other than O’Dimm.

And in both cases, the men are outwitted by the Devil — Twardowski is caught when he visits an inn called Rome, whereas Olgierd is tricked into standing on a stone mosaic of the moon after Geralt completes his wishes.

The story of Twardowski itself is based on the immensely popular German legend of Faust — another man who trades his soul to the Devil for special powers and knowledge.

Given all these references, there can’t be any doubt — Gaunter O’Dimm is the Witcher version of the Devil.

As for the actual name — Gaunter O’Dimm — this appears to be a reference to two different characters found in the works of prominent horror/fantasy writer Stephen King.

The first name Gaunter is likely a reference to Leland Gaunt, the antagonist of King’s horror novel Needful Things. Gaunt is a demon that tricks people into giving him their souls, which sounds a lot like what Master Mirror does in The Witcher.

And what about his alternate names — Man of Glass and Master Mirror?

The interpretation that makes the most sense is to look at what a mirror symbolizes, especially in the context of Gaunter’s pact with Olgierd. A mirror shows the reflection of the person looking into it.

In this sense, this could represent how Gaunter reveals the true nature of a person — what they are TRULY like on the inside — by making a pact with them.

And if you choose the help Olgierd in the end, this idea is further developed since you have to find a mirror that cannot be broken in order to find and defeat O’Dimm.

Now that we know who he is, let’s talk a little bit about his intentions. For such a mysterious and complex character, Gaunter O’Dimm is actually driven by a pretty simple agenda. He is after two things — human souls, and a way to amuse himself.

It is entirely possible that O’Dimm actually requires souls to survive; after all, he is the embodiment of pure evil, so it stands to reason that he can only exist as long as humans sin and thus feed his existence.

This would also explain why he has to go through the elaborate contract ritual before he can claim a soul — otherwise, the person would not be guilty.

But maybe he doesn’t need souls at all and is driven purely by the entertainment value that he gets from tricking people into signing contracts that ultimately lead to their doom.

Meanwhile, with Geralt, his agenda is slightly different. Since Geralt would be impossible to entice into a deal for his soul, O’Dimm instead takes an interest in him as a tool for taking the souls of other people.

This is exactly why he helps Geralt twice — first at the beginning of the game by helping him find Yennefer, and later in “Hearts of Stone,” when Geralt is taken prisoner by the Ofieri.

Knowing that Geralt will now owe him a debt, O’Dimm uses the witcher to complete his contract with Olgierd — since Olgierd stipulated that O’Dimm can only claim his soul after three of his wishes are fulfilled by someone else.

If you choose to help Olgierd, O’Dimm’s last words translate into: “You are primitive. You think you’ve defeated me but you are wrong. I can’t be killed, I will be back.”

These closing lines confirm what we already know about Gaunter: while you’ve succeeded in banishing him from the physical world, the Devil cannot be killed.

All that we can guess is he goes back to his own dimension for a time, perhaps until someone else summons him.

Perhaps he will re-appear in future DLC content or even the next Witcher game, but never as the primary villain. Whatever the case, he is a very interesting character that we hopefully see more of in the future.

Interested in more Witcher 3 lore? Check out our piece on Avallac’h, the elf whose true intentions remain mysterious. Next, read up on the origins and history of Nilfgaard and its emperor, and learn more about the oldest living witcher and Geralt’s mentor Vesemir.