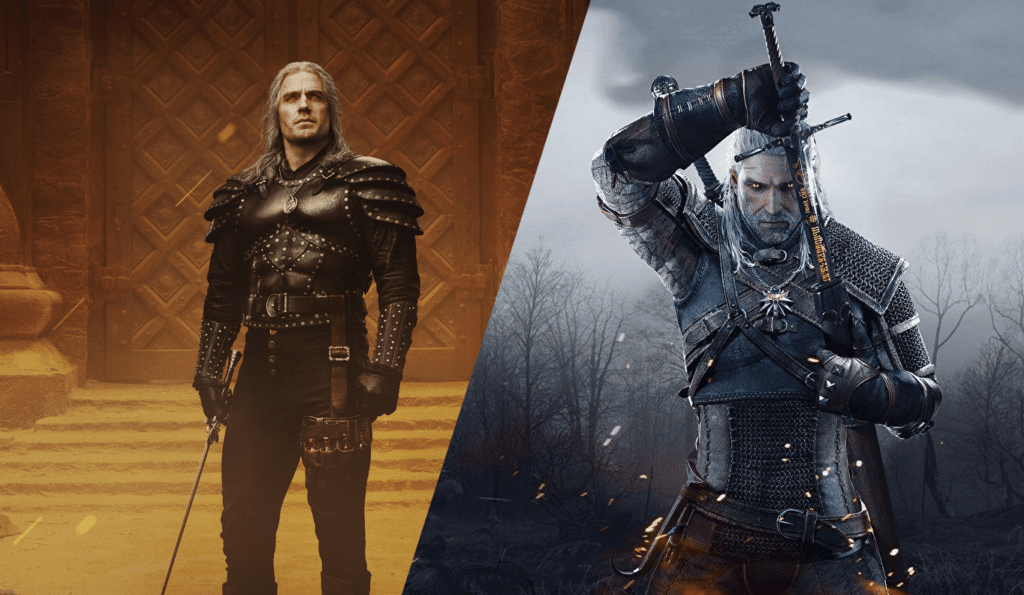 You’ve probably heard of Netflix’s The Witcher, which debuted its first season in December 2019. Like The Witcher 3: Wild Hunt and the first two games, the TV show is based on the series of Witcher fantasy books written by Polish author Andrzej Sapkowski.

Geralt is the protagonist in both the show and the game, with many similarities in the story, characters, and other elements. But there are some key differences, like Geralt’s age and relationships with other characters.

Here’s a detailed comparison of Netflix’s Witcher show vs. Witcher 3, including the first and second seasons.

Arguably the biggest difference between The Witcher TV show and Witcher 3 is the storyline.

The show is largely based on Andrzej Sapkowski’s “The Last Wish” and “Sword of Destiny” short story collections, which are the first two books of the 8-part Witcher series. It starts out by telling us the origin stories of Geralt, Yennefer, and Ciri before following their combined adventures.

On the other hand, the game takes place several years after the events of the books. In that sense, Witcher 3 is not canon or based on any specific Witcher book, but rather borrows the novels’ established characters and themes to tell its own story.

The best example of this is the Wild Hunt — in the books they’re not a major element, but in Witcher 3, they’re central to the story.

The timeline of the show also differs from Witcher 3. The TV show’s first season has a fairly confusing timeline because it tells the stories of three separate characters occurring at different times: Geralt, Yennefer, and Ciri. It’s not until The Witcher’s second season that the timeline becomes linear again.

On the other hand, the timeline of the Witcher 3 game is fairly straightforward with a clear beginning, middle, and end.

Netflix’s The Witcher and the game also differ in their characters. Although the core roster is the same, their portrayal has some notable variations.

One hotly contested difference is that many characters were “race-swapped,” meaning that they were portrayed by actors of a different ethnic descent than that portrayed in Witcher 3 and the books.

Geralt has a similar appearance in both The Witcher show (played by Henry Cavill) and Witcher 3. He’s handsome, muscular (although Cavill is certainly more so) has long, gray hair, and pale skin. Both also sport the characteristic wolf medallion.

The Witcher 3 Geralt is certainly older because he is at the end of his witching career, whereas Henry Cavill is just starting his. That also explains why the show’s Geralt lacks the beard and the scars of his game iteration. On the whole, however, they look quite similar.

As for their personalities, there are also more similarities than differences. They both have a deep voice and a brooding demeanor, even if Witcher 3’s Geralt is more funny and sarcastic whereas Cavill’s is more of a stoic figure of few words.

Both are also masters of sword fighting as any witcher should be. Both the show and game Geralt also use the witchers’ signature magic sign abilities.

Geralt carries both his regular steel and silver swords directly on his back in Witcher 3. Although he also has both swords in the show and is seen carrying them together in a special bag several times, the show Geralt only uses one sword at a time.

In that sense, Netflix’s show is closer to the books than the games, where Geralt is said to typically leave the silver sword with his horse for an obvious reason: mobility.

The sorceress Triss Merigold is a key character in both the show and Witcher 3. However, whereas in the game she has a romance with Geralt and can be seen by his side throughout not only the third but also the previous two Witcher games, none of that is present in the Netflix show.

Aside from that, she also looks very different: Triss is “race-swapped” as the actress playing her has darker skin, compared to the younger, pale, red-haired sorceress in Witcher 3. The show Triss also seems like a more responsible person rather than someone out for fun and excitement.

Yennefer is a powerful, beautiful sorceress with raven hair who is Geralt’s main romantic interest in the books. She retains that role in The Witcher TV show.

In the game, however, Yennefer has to vie for Geralt’s affection with Triss in the Yennefer-Geralt-Triss love triangle. Another difference is that we learn about Yennefer’s backstory in the show, whereas those details are not really discussed in Witcher 3.

Similar to Triss, Yennefer is also played by an actress of a different ethnic descent, which drew criticism from some fans. But she does have the same feisty personality that we see in the game.

Dandelion (or Jaskier as he is known in the show) is the bard who plays the role of Geralt’s close friend in both the TV show and in Witcher 3 (and previous games). In both cases, he is flamboyant and funny, although he does have more appearances in the show.

Another notable point of difference is the characterization of the Nilfgaardian Empire. Although the show is mostly faithful to the books, it does portray Nilfgaard as the bad guys, especially when compared to the game.

There are also some differences in the world. While we do see and hear a lot of the same concepts (such as the fearsome Nilfgaardian Empire), the show’s world is more grounded in reality.

For example, there are far fewer monsters, whereas in Witcher 3 it seems like you can’t go two feet without running into some sort of otherworldly creature. In that sense, the show is more of a representation of Medieval Europe than a fantasy setting.

Another area of comparison between Netflix’s The Witcher and Witcher 3 is the nudity. Both feature multiple intimate scenes, most notably between Geralt and Yennefer.

Having said that, Geralt certainly gets luckier in the game. For one, he has additional romance options, including Triss, Keira Metz, Shani, Madame Sasha, and others. Geralt also has the option of visiting brothels to spend his hard-earned gold.

The Witcher Season 2 vs. Witcher 3

With the release of the show’s second season in December 2021, we got more material to compare its similarities and differences with Witcher 3.

The most glaring difference, of course, is Eskel’s destiny. The show’s portrayal of Geralt’s dear friend, considered a brother, is strikingly different from the game (and the novels). First of all, in the games, Eskel is still alive. Since they are set years after the events in the show, we can assume that the face-scarred Witcher influenced Geralt’s life somehow.

Unfortunately, that’s not the case in the series since Eskel is killed with less screen time than Geralt’s beloved mount, Roach. This enraged many fans that expected him to be a prominent character on Netflix as he is in the books and Witcher 3.

Eskel’s personality is also a far cry from his game counterpart. While he doesn’t interact much with Ciri in Witcher 3, he’s obnoxious and petty on the show. This is different from the calm demeanor he presents in the game, where he’s probably shaping up to be the next Vesemir.

In the show’s second season, we see the start of Ciri’s training, which is also displayed at the beginning of Witcher 3. It’s pretty much the same. She’s training to become a professional monster-slayer while Triss tries to tap into her innate magic talent to understand more about her mysterious power.

But there is one key difference: In the show, Ciri uses her teleportation skills scarcely. While she still can’t control it, at the end of the season, we see her teleporting Geralt, Yennefer, and herself out of harm’s way. Whereas in the game, she dominates her time-and-space magic and can use it willingly.

On the topic of sorceresses, the second season shows Yennefer losing her magic skills and even betraying Geralt by trying to trade Ciri for Voleth Meir to regain her powers. This never happens in Witcher 3 or the books.

The Wild Hunt is one of the main similarities between the Netflix show and Witcher 3. Lauren Hissrich, the showrunner, said the Wild Hunt will play a significant part in the third season. That’s on par with the Witcher 3, where the Hunt is the main antagonist and pushes the whole plot along.

In contrast, the Wild Hunt is only briefly mentioned and explained throughout the novels. That’s something the show may change to please the gamers.

Vesemir and Lambert also make their appearance in The Witcher’s second season. Unlike Eskel, their portrayal is fairly similar to the games, with Vesemir taking the grizzled witcher dad role and Lambert having the same sharp tongue and cynical outlook. The only difference is that Lambert doesn’t at all look like his game counterpart.

Aside from that, Coen, the fourth new witcher introduced in the second season, is completely missing from Witcher 3.

And last but not least, right at the end of the second season, we are introduced to the emperor of Nilfgaard, the White Flame himself, Emhyr var Emreis. His true identity is Duny, Pavetta’s husband, and Ciri’s father.

Emhyr gets much more screentime in Witcher 3, where he frequently appears to talk with Geralt and try to make Ciri the rightful heir to Nilfgaard. But we do expect to see more of him in the third season.

Netflix’s The Witcher vs. Witcher 3: More Alike than Different

Ultimately, Netflix’s The Witcher and Witcher 3 are more alike than different because they’re based on the same source material. They have the same central characters, lore, and dark, gritty, Medieval setting.

Having said that, there are enough differences to make it fun for someone who has only watched the show or played the game to venture into the other medium.

It will be interesting to see how the show progresses into its third season and beyond — will we see more similarities, perhaps with the Wild Hunt becoming Geralt’s main adversary as in Witcher 3? We’ll have to wait and see.

In the mood for more Witcher lore? Check out the story of Gaunter O’dimm, one of the best villains in Witcher 3, or read about the mysterious elf Avallac’h.

3 thoughts on “Netflix’s Witcher vs. Witcher 3: Differences and Similarities”