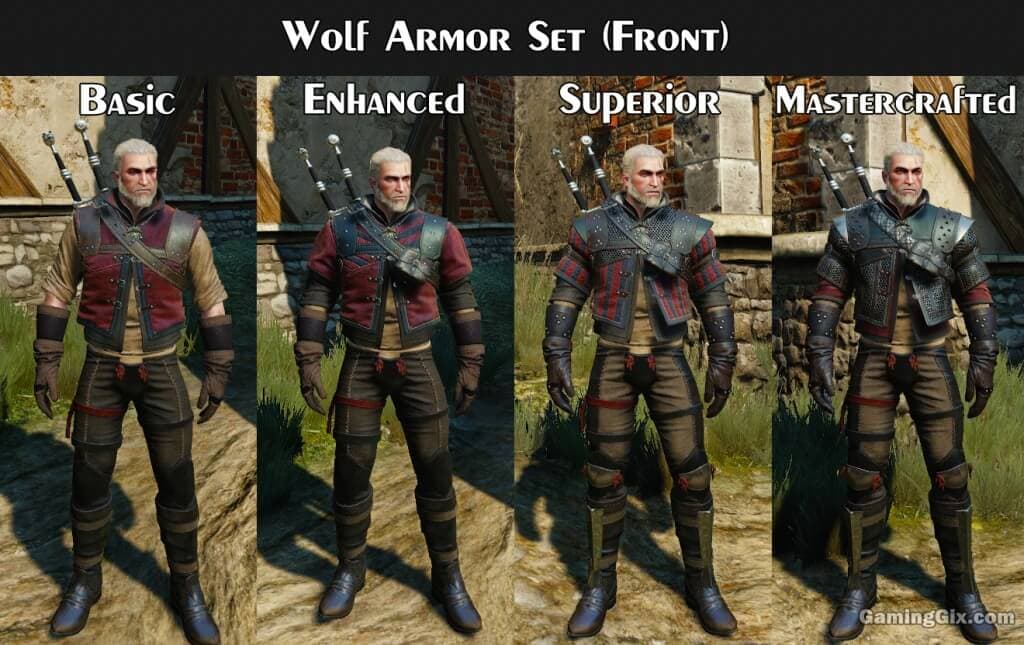 One of the best armor sets in Witcher 3, the Wolven Witcher gear is a medium armor set that provides excellent all-around bonuses. Like the other Witcher School gear sets, it can be crafted by using diagrams you find in the game.

Here’s a detailed walkthrough for obtaining every diagram for every upgrade level (basic, enhanced, superior, mastercrafted, and grandmaster) of the Wolven Witcher gear set.

We’ve included map locations for the Wolven armor, boots, gauntlets, trousers, silver sword, and steel sword diagrams. Start at the beginning if you’re obtaining the whole set, or look for the location of the specific armor or sword diagram you’re after.

Note: if you’re having trouble finding the chest with the diagrams, look for a Wolf Head symbol; this will give you a general area to search.

Fast Travel to Kaer Morhen, and then go up the road to the old Signal Tower near Kaer Morhen castle. You will find a note inside a chest in the tower; read the note to start the quest for the normal wolf set.

Note: If you’re collecting the entire set right away, be sure to scroll down and find the locations for the Enhanced and Superior diagrams, because they are also located in Kaer Morhen.

Use your witcher senses on the first level of the tower and activate the crystal on the wall with your Aard sign.

You will then also need to pick up the 2nd crystal by going back to the entrance of the tower and going through the hole in the wall. After this, activate the crystal, and jump into the portal. Here you can pick up the wolf armor diagrams.

The diagram for the wolven steel sword is found inside the Garrison to the west of Kaer Morhen.

The silver wolven sword diagram is found in the far north of the Kaer Morhen map at the Ruined Watchtower; the easiest way to get there is to take the boat from the southern end of the lake.

Enhanced Wolven armor is located on a small island south of Fyke Isle in Velen (it’s located underwater). Don’t forget to loot the other stuff on the island.

inside a cave on the eastern end of Velen.

inside a small cave at the back of Crow’s Perch, near the main castle building, the same place where you first meet the Bloody Baron. Go down the ladder to the bottom of the cave near the water to find the chest.

on a small island in the lake at Kaer Morhen – the chest will be submerged in shallow water.

Same place as the basic silver sword diagram, at the Ruined Watchtower in northern Kaer Morhen. The diagram will be on a wooden ledge on one of the walls.

Inside a ruined fort on the bottom level, Hindarsfjall island (eastern Skellige Isles). The chest is in the top-left corner of the room. The room is filled with poison so you need to use your Igni sign to detonate it. Keep in mind that the poison comes back very quickly and that you need to use Igni several times to get to the chest.

all of these diagrams are located in Kaer Morhen; Trousers in an old cave used for Witcher Trials to the northwest of the fortress (the chest is behind some breakable rocks); boots to the far east (follow the river to a cave); and gauntlets in an old iron mine, guarded by a level 30 Earth Elemental.

The Wolven steel sword is inside a sunken ship on the south-western end of Velen. It is located under the stairs to the hull of the ship.

The Wolven armor is inside a small chest near the panther statue in far southern Velen.

Inside a locked shack, not far from the Nilfgaardian Camp in southern Velen. You will need to kill a Fiend to loot the keys to get inside.

At the old watchtower on Spikeroog Island (north-west Skellige Isles). It’s on a wall near the travel post, so you will need to climb up to get it.

Behind a ruined tower on Undvik island in Skellige (south-west of map).

On Ard Skellig in the middle of the island. This area is guarded by a high-level Fiend (Morvudd) but you don’t actually have to kill him. Just walk around the side of the tower and look for the chest on the wall.

Interested in other high-quality armor and swords? Check out our guides to the best armor sets and weapons in Witcher 3.