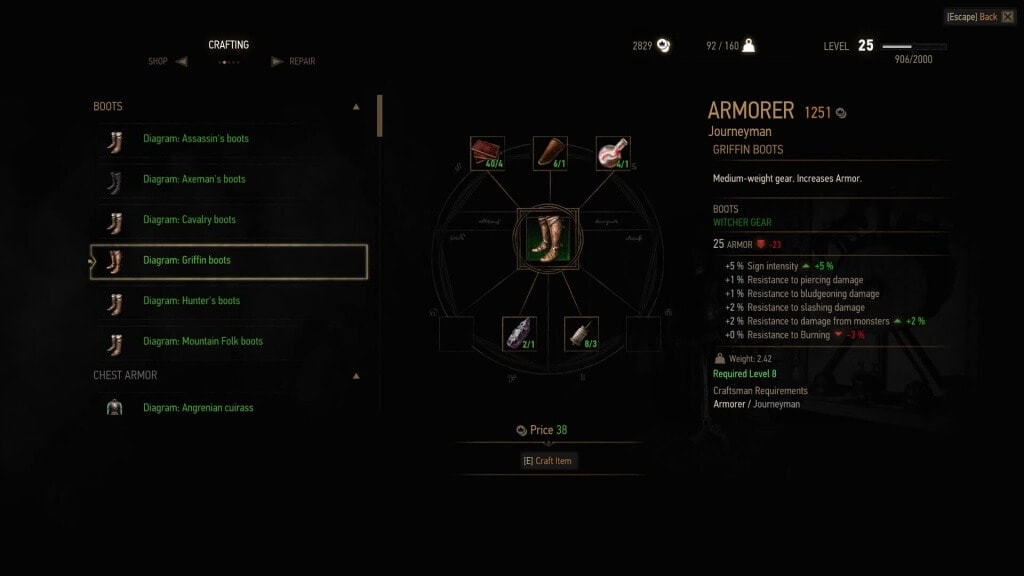 The crafting system in Witcher 3 is intuitive and simple to use. To craft a weapon or armor piece, you need the associated diagram and crafting components.

Crafting components are either found in their completed form (e.g. silver ingots) or created at a smith by using the raw ingredient (e.g. silver ore). Geralt himself cannot craft anything however; he has to visit either an armorer or a blacksmith to do the crafting.

Crafting Materials can be obtained by one of 3 methods:

Similarly, diagrams can also be looted or purchased from smiths. Whenever you get a new diagram, it is automatically added to the list of the items you are able to craft.

Next, you need to visit an armorer or blacksmith, who are usually found in cities or villages, and are marked with a hammer+anvil or hammer+armor icon on your map. As the name suggests, armorers can only make armor pieces, while to craft weapons you need to see a blacksmith.

Both of these smiths will be able to turn your raw materials into crafting components, and craft armor / weapons from your learned diagrams, provided that you have the required materials. They also offer item dismantling, repair, runestone removal, and normal merchant services.

Armorers and Blacksmiths are further broken down by their skill level – novice, journeyman,  master, and grandmaster. The higher the skill level of the smith, the higher level / higher quality gear he can craft for you. Master armorers and blacksmiths can craft mastercrafted items; there is only one master armorer and blacksmith, and they both require quests to be unlocked.

The master armorer is Yoana, found in Crow’s Perch in central Velen (the Red Baron’s castle). To unlock her services, you need to complete the level 24 quest “Master Armorers“, which will require you to travel to Skellige and retrieve blacksmith’s tools.

The master blacksmith is Hattori, found in Novigrad. You have to talk to him and complete a level 24 quest “Of Swords and Dumplings” to unlock his services.

Grandmaster gear is only available in the Blood & Wine expansion, and can be crafted at the Grandmaster Smith in Beauclair.

In addition to crafting items, you can also enhance any item that has slots by inserting runestones. Runes can also be either crafted (especially the more powerful ones), purchased directly or as diagrams,  or found as loot.

Runes give various bonuses, but generally speaking, runes that go into weapons will give a chance to do/increase something (such as 5% chance to cause burning on attack), while runestones that go into armor will increase sign intensity.

As a final note, I would highly recommend for you to take advantage of crafting in Witcher 3 because you don’t really have to go out of your way to find either crafting materials or diagrams, and because the best armor in Witcher 3 – the Witcher School Sets (Bear, Cat, Griffin, Wolf, Viper, Manticore) – can only be obtained by crafting.

Crafting is a relatively cheap and easy way to improve your gear, which is especially important on higher difficulties.