It has been quite some time since we’ve had the opportunity to be excited about The Witcher 3. Sure, Cyberpunk 2077 is out, but it has had its own share of issues. And let’s face it, it’s certainly not the expansive Witcher 3-like game a lot of people were hoping it would be.

So, what to do to scratch the itch? Although CD Projekt Red is working on a new Witcher game, it will take some time. Perhaps you’ve already been looking elsewhere, so let us help you find some alternatives that can spark the same joy.

Here are the 15 best games like The Witcher 3 you can play right now, with a good mix of newer and older titles.

Hey, you, you’re finally awake…to the fact that Skyrim was and still is a great game, warts and all. The freedom of exploration allows you to create your own story and the way you want to play the game.

Skyrim is probably the closest game to Witcher 3 that you’ll ever find, even if it does take the open world, “craft your own story” element even further.

What Skyrim might lack in the development of strong relationships to various characters it makes up for in the sheer amount of places to visit and their variety.

From Falkreath to Winterhold, from Solitude to Windhelm, there is much to see and enjoy. It is entirely up to you whether you want to burden yourself with the political struggles of the province of Skyrim or you would much more prefer to roam the countryside.

Yes, we are hitting the nail directly on the head right away when it comes to Witcher 3 like games. You will have to look far and wide to find something that ticks so many similar boxes.

If you’re a fan of meaningful dialogue choices, medieval settings, long narratives, and a diverse cast of characters, the Dragon Age series is a great choice.

Sure, the gameplay is somewhat different since you’re controlling a party and can pause the game to issue commands. On top of that, the first two games aren’t really open-world.

However, if you’re looking to immerse yourself into a fantasy setting with a strong story similar to Witcher 3, you can’t go wrong with Dragon Age.

We recommend going with Dragon Age: Origins if you’re more into the story side of things, and Dragon Age: Inquisition if you care more about graphics and open-world gameplay.

How do you go about looking for a Witcher 3 like game without mentioning The Witcher 2? This was the big one, the one that moved away from the clanky beginnings and brought Geralt and his world to the pinnacle of PC gaming, as well as to consoles for the first time, on Xbox 360.

The gameplay of The Witcher 3 might be leaps and bounds ahead of the one in this game, however, this is the DNA from which it evolved.

If you haven’t played it yet, you might find it hard and pretty difficult, especially regarding the controls, but it will surely make up for it with a wonderful story that branches halfway into two, pulling you in for an obligatory second playthrough. 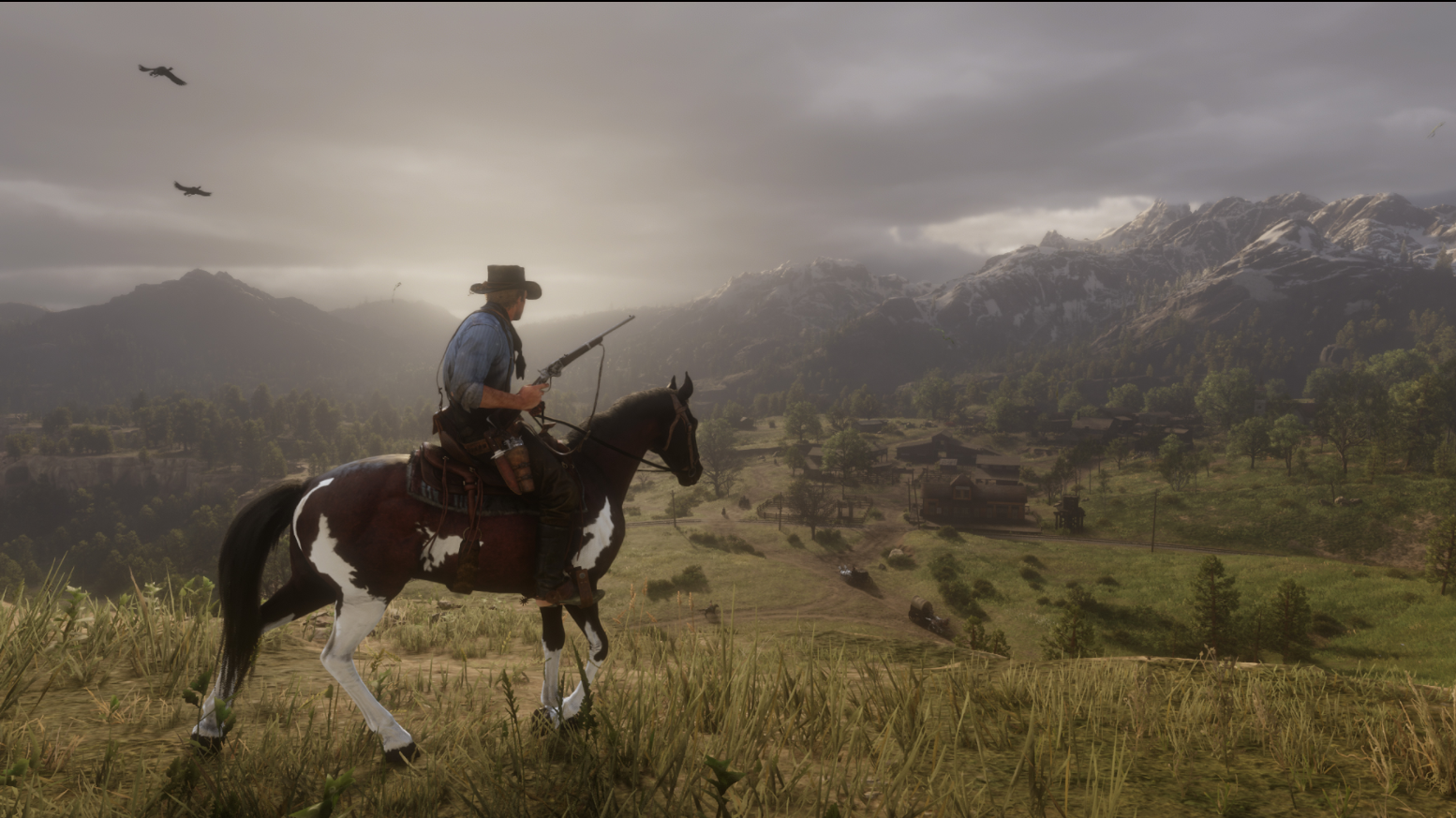 The setting might be a little different, but in spirit, RDR2 is very much a Witcher 3 like RPG. It’s about being immersed in a believable, realistic world that really takes your gaming experience to the next level.

The Wild West in its dying days is also comparable to the beleaguered Northern Realms, with bandits roaming the roads, and the organized powers on their way to put everything under one boot, trying to drive the old world out.

The open world of RDR2 is perhaps even better than the Witcher 3, with so many different things to do. 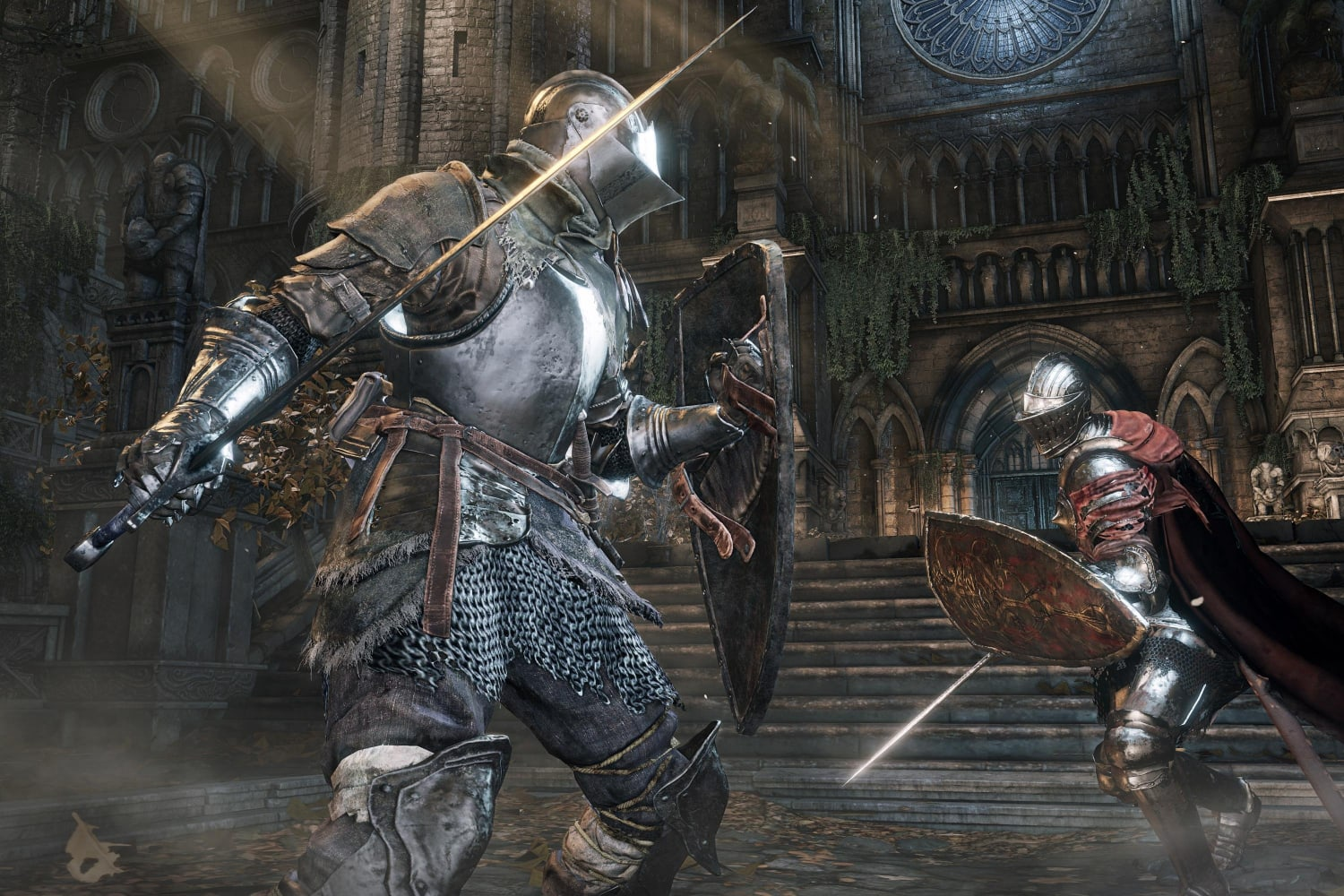 Considered one of the greatest RPG series of all time and perhaps the pinnacle of 3rd person melee combat gameplay systems, the Dark Souls series was actually a big influence on the combat of Witcher 3.

If you’re after a difficult game with deep combat and an immersive, unique world, you won’t be disappointed.

And let’s not forget the amazing minimalist storytelling of Dark Souls. While it’s not the structured approach of Witcher 3, it certainly has the same level of worldbuilding and immersion.

Souls players also love to combine various items of clothing for fashion purposes, so-called Fashion Souls, which we did emulate in our Fabulous Ofieri build.

The amount of weapons and armors that you can use in Dark Souls games is vast and the best part is that most of them are stat-based. This means that they scale with the level of the character, which also means that they are getting better later in the game, unlike some of the Witcher 3 items.

Fallout: New Vegas is considered by many to be the best Fallout game, brought to you by the members of the original Fallout team. New Vegas has a gripping story and each side quest is a story worth exploring, filled with colorful post-apocalyptic characters and rich lore.

Oh, and your decisions do have consequences, which is something that the fans of the Witcher games will appreciate. It’s like a dystopian future version of Witcher 3 that’s arguably even better in some aspects.

Of course, you can also play the newest Fallout 4 and mod it out to make it better.

If you enjoy slaying monsters, Shadow of Mordor is a great Witcher 3-like game.

It’s probably the most successful game inspired by the Lord of the Rings. Shadow of Mordor brought to the players the awesome Nemesis system, where the enemies who killed you in the course of the game went up in orc hierarchy, becoming even more powerful when you meet them next time.

A stoic, brooding main character, a fun combat system, an open world with many things to do and interesting locations to explore, in probably the best-known fantasy universe should make this a go-to for anyone who is looking for Witcher 3 alternatives.

In its heyday, Mass Effect was a universally loved series. The galaxy-spanning sci-fi shenanigans of a crew that becomes fast friends (and romantic interests, should you wish so) are done in a glorious space-opera fashion, which never veers off into silly territory.

This series is a great Witcher 3 alternative as it also has excellent storytelling, worldbuilding, and characters. The big difference is that it’s set in the future and allows you to control a party of characters, similar to Dragon Age.

The best part is that the Mass Effect trilogy came out as a remaster for modern platforms in May 2021.

Dragon’s Dogma has many similarities with Witcher 3, like an open (albeit smaller) world, unique monsters, and a medieval setting.

The interesting thing About Dragon’s Dogma is that it’s made by Japanese developers, but in a Western style. The combat system is tight and responsive and there are monsters and a dragon to kill.

Some of the monsters are so large that you can actually climb them to be able to reach their weak points, which might not fit the “witcher 3 like game” mold, but it sure sounds exciting!

Assassin’s Creed has gone through many iterations over the years, but the recent trilogy encompassing Origins, Odyssey, and Valhalla, has certainly found inspiration in the works of CD Projekt Red. Valhalla is probably your best option since it’s close to Witcher 3 in setting and feel.

The games are different from your Assasin’s Creeds of yore. There is an open world and a lot to do, bringing many hundreds of hours of gaming, if you want to do everything out there.

If you’re looking for a fun, expansive open-world series with beautiful graphics based on myths and legends like Witcher 3, you’ll enjoy yourself.

This is another classic fantasy RPG that many don’t know about.

This title has gone through hell and back, having a very unsuccessful launch, although many notable names worked on it (including R. A. Salvatore and Todd McFarlane). This also means not a lot of people tried it, so it might prove a somewhat hidden gem.

The combat system is something that you might like if you have enjoyed melee builds in The Witcher 3 (for a more in-depth look check our best Witcher 3 builds). A limitless combo system should pique your curiosity as well.

The best part is that the game was recently remastered as “Kingdoms of Amalur Re-Reckoning.”

Fable is one of the most celebrated RPG games of all time, perhaps best known for its morality system that allows you to become as good or evil as you’d like. The game got a new lease on life with the release of Fable Anniversary in 2014, which updated the original game’s graphics and audio.

If you like the quest and choice system of Witcher 3, Fable will be right up your valley. While it might not be as deep and complex as Witcher 3, Fable has all the elements of a great RPG, including a neat aging system and immersive gameplay.

You can customize how you play your character with many options for melee, ranged, or spell combat.

GreedFall is an interesting open-world action RPG that comes from the French dev team Spiders. It is a marked improvement on their previous attempt, Technomancer, and shows that this team has a lot of promise.

GreedFall’s story explores the themes of colonialism in a 17th-century world where magic and technology go hand in hand and the “natives” are not powerless, yet still overrun by the colonists.

In a way, the destiny of the islanders is reminiscent of that of the Elves in the world of the Witcher: a proud, powerful people, who are unable to stem the tide of the newcomers. Oh, and have we mentioned monsters born of deep magic?

The fan-favorite red-haired protagonist, Aloy, hunts monsters just like Geralt, although they are of a different breed: robotic dinosaurs of the post-apocalypse.

When it came out, Horizon Zero Dawn was a breath of fresh air in the somewhat stale open-world market, with an original setting and lore, and it still holds up today.

HZD will provide hundreds of hours of pure, unadulterated fun for the lovers of action RPGs, and it should be enough to quench your thirst for games like the Witcher 3 for some time to come.

There’s also a sequel that was released in 2022 called Horizon Forbidden West, which is only available on Playstation.

This game is another sleeper RPG hit that many gamers never heard of. And that’s a shame because Dark Messiah has one of the best combat systems we’ve seen in any RPG game.

This first-person game is set in the Might and Magic universe made famous by the turn-based strategy games. You can block attacks and kick enemies cliffs, into fires, into wells, and find other creative ways to complete objectives.

Kicking orcs never felt so satisfying. And there’s a neat talent system to allow you to customize your character as a warrior, mage, or rogue, as well as puzzles and other fun things. The only weak part of the game is the story, but if you’re looking for a solid RPG with great combat, Dark Messiah will scratch that itch.